Turbo Sprint is based on the classic arcade game Super Sprint.  The game features 8 tracks that range in difficulty, up to four players can take control of either a Blue, Red, Yellow or Green car.  Cars that are not controlled by players are computer controlled.   When all 8 tracks have been completed the game loops back to the first track but the difficulty is increased with various obstacles and increased speed of the computer controlled cars.  New players have the opportunity to join a race after each track has been completed.

Please see the FAQ below on the physical glossy box edition and time scales.

You control a car by simply using fire button to accelerate and left or right to steer.

By default the controls are mapped to the following game ports:

Each car can be mapped to different inputs, including the Amiga parallel port adapter to provide an additional two D-Sub ports.  To map ports choose CONTROLS from the main title menu using any input method from other cars.  For players on a CD32 console a special adapter can be used to split the two standard game ports into four players, to do this you can select HYBRID as the controller port.  The adapter maps up/down/button 2 to left/right/button 1 of a second adapter.

To play the game you need to try and finish first or in front of any drone cars, each circuit must be completed 3 times before the race is over.

Cars can crash into the sides of the track, if a car is moving at a high enough speed then it will explode on impact and be subject to a time penalty until its team Chopper can deploy a new car.

Cars can be customised (upgraded) by collecting spanners which will appear randomly on tracks, once a car has collected three spanners it is then eligible for an upgrade.  The number of spanners a car currently has will be shown in the colour panel for that car.  The panel will only show 3 spanners at a time even though a car may have more spanners.

Cars can be upgraded in one of three ways:

Adding traction to your car will make it stick to the track better when at high speeds.

Adding speed will enable your car to reach a higher top speed.

Cars can increase their score by completing segments of each lap.  A car cannot take shortcuts around a lap.  Points will drop randomly into the track which can be collected to increase score, these will be 100 and 150 points.

If any computer controlled car finished further a head of a player car then that player car will be knocked out of the race.  Cars that have completed a lap or track in a record time will be saved as a world record time and will be given a bonus score.

Nitros - Nitros will drop on to the track randomly, collecting a NOS will temporarily give a car a short turbo boost.

As players progress through the game, obstacles and hazards will appear on the track which should be avoided.

Oil slicks - Cars crossing an oil slick will send the car spinning across the track with reduced control, speed will also increase for a short time.

Mud patches - Cars crossing mud patches will be slowed and sent into a spin, the player will not be able to control their car.

Water pools - Cars crossing water will be slowed down

Walls - Vertical and Horizontal walls will raise and lower, crashing into a raised wall will cause your car to halt and rebound.

Cones - Similar to Mud patches, cars that hit a cone will be slowed down, the cone will disintegrate on impact.

Mines - Mines will appear randomly on the track in later levels, any car touching a mine will immediately explode and be subject to a time penalty.

Tornado - On all tracks there is a tornado which moves randomly around the track.  Cars that are near the tornado will be thrown into a spin and sometimes off the track.

Turbo Sprint will run on any stock AGA Amiga including A1200/A4000/CD32.  If running on a stock machine you must ensure enough chip ram is available (1830kb) by disabling add-on peripherals, this can be done by booting the machine and holding both left and right mouse buttons.  Disable any external drives that are attached if running from floppy/ADF.

Although not supported, the game can also be ran direct from Workbench, simply copy the game files from the floppy or extract the supplied LHA archive onto your hard drive and execute the turbo_sprint.exe file.

A WHD slave for the game has also been supplied for convenience, this also is not supported.

The game has been tested on a wide range of hardware and expansion boards.  Even so there is the possibility that the game will not run on your platform, for this reason a time limited (5 minutes) free release has been made available for you to test on your hardware before you commit to purchasing the game.

Be sure to take the opportunity to test the game using the 5 minute time limited ADF beforehand committing to purchase.

The game runs in hires interlaced mode.   If running in WinUAE choose interlace mode by selecting Double Fields within the Display options.  Some older LCD televisions with SCART connections will deinterlace the display automatically, this makes the game look superb and is the best way to experience the game.

Q) When will the big box version of the game be dispatched?

A) As soon as I have the numbers of people wanting them after 2 weeks from release I'll place the order to have them made.  The lead time to then get the boxes delivered to me here in the UK is around 3 weeks.  Once done I will then need to ship the box to you.  In summary, please allow for at least 6 weeks for the box to be delivered.

Q) What does the big box look like and what are the dimension?

A) The dimensions of the box are 225x195,40.  To put it into context this is the size of the common large boxes that were released for the Atari ST and Amiga... i.e. Frontier II size.   See box art for below. 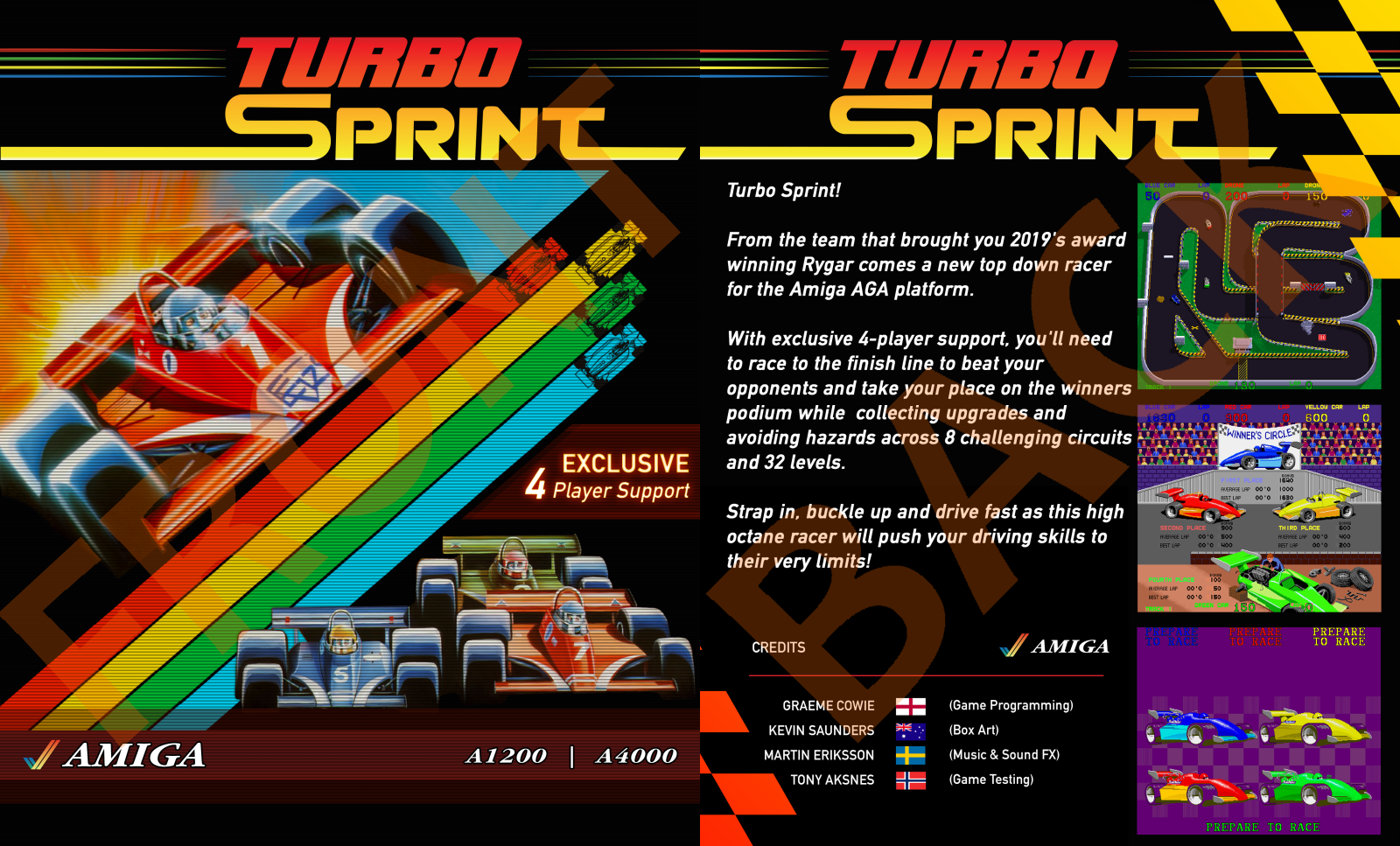 Q) What is included in the Big Box Glossy Edition?

A) At a minimum you'll get the Turbo Sprint floppy disk with vinyl label, base foam to protect the floppy disk and of course the glossy big box.

Q) The big glossy edition is expensive, does it include shipping?

A) Yes, the edition includes shipping costs to anywhere in the world.  For shipping to the UK I will be happy to part refund some of the shipping cost if you contact me.

A) In a word, no.  If you want to play a similar game on A500 then can I suggest something like Badlands.

Q) How much time did this game take to make?

Q) What language is the game programmed in?

A) The game is coded in pure Motorola 68020 assembler.

A) I approached Atari twice early in development without reply to use the name "Super Sprint" as the game title and to keep faithful to the the original game for the Commodore Amiga.  Unfortunately, I did  not get a reply so a number of things were changed throughout the game to make it distinct from the Atari game.

Q) The game looks similar to "Super Sprint", is this game endorsed by Atari?

A) As per the previous question & answer, no the game is not endorsed by Atari.  It is a fan made transformative game loosely based on their arcade game from 1986.

Q) Can I play Turbo Sprint on modern games consoles?

A) No - Turbo Sprint is released exclusively for the Commodore Amiga Retro platform.  If you wish to play the Atari version of "Super Sprint" then their game should be available on modern platforms, however I should stress that the game really is not the same without the arcade steering wheels that came with the coin-op game.

Q) Will you release the source code to the game like you did with Rygar and Bomb Jack Beer Edition?

A) Yes, I've included the source code to the game in both editions.

If anything is not covered then please post questions and they will be answered asap. 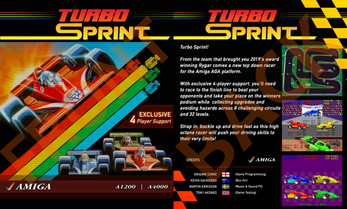 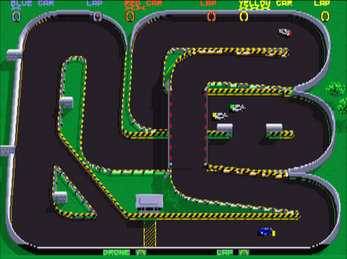 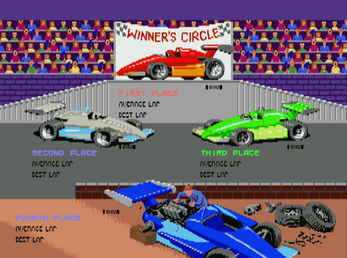 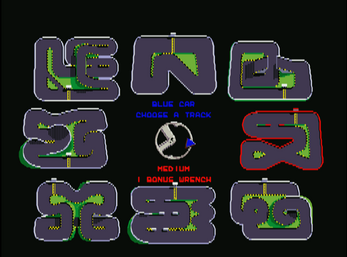 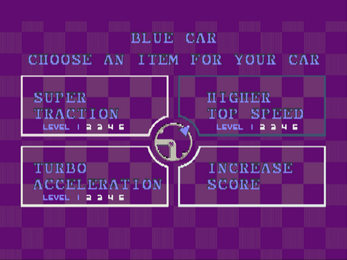